Here’s the complete “Data Learns to Be Funny From Joe Piscopo” subplot (The Outrageous Okona):

Here’s an example of Nicholas Meyers’ contribution of Star Trek-style banter to The Wrath of Khan:

Here’s the full scene of Kirk getting buried in Tribbles:

Here’s the original fight scene from The Trouble With Tribbles:

And here’s the same scene, done Back to the Future Part II-style, with the cast of Deep Space 9 Forrest Gumped into it. Take note of everything that the original does right (sprightly, martial music, really good physical comedy, consistent character makeup and costumes) and what DS9 does wrong (the soundtrack pompous and overblown, the “original style Klingon” who looks like he was bathed in red makeup and a terrible wig, the Starfleet MP who is way huger than anyone in the original series, or any actor in the 1960s, period):

From the same episode, another example of later-day Star Trek trying to be funny:

I didn’t have time to get into the Mudd episodes, both examples of how important humor were to the franchise. Harcourt Fenton Mudd (played by Roger C. Carmel), was a galactic con man whose scams centered around beautiful young scantily-clad women.

Mudd’s Women was one of three scripts in contention to be filmed as the (second, official with Kirk) pilot, and Roddenberry really pushed for it, although thankfully he was convinced to make Where No Man Has Gone Before instead.

And here’s I, Mudd in its entirety:

Here’s a fan-made trailer for Mudd’s Passion, the animated series’ sequel episode. Take note: the only guest stars from Star Trek carried over by Filmation to the animated series were Stanley Adams (Cyrano Jones from the Tribbles episodes) and Roger C. Carmel (Mudd):

And in 1994, a Harry Mudd original novel was published. I haven’t read it, because life is short: 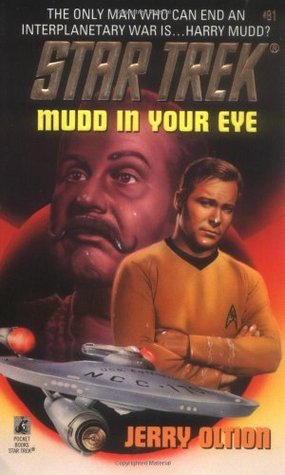